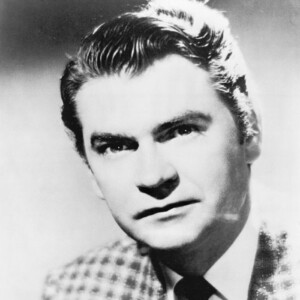 Samuel Cornelius Phillips (January 5, 1923 – July 30, 2003), better known as Sam Phillips, was an American record producer who played an important role in the emergence of rock and roll as the major form of popular music in the 1950s. He is most notably attributed with the discovery of Elvis Presley, and is associated with several other noteworthy rhythm and blues and rock and roll stars of the period.

Phillips was a native of Florence, Alabama and a graduate of Coffee High School.

In the 1940s, Phillips worked as a DJ for Muscle Shoals, Alabama radio station WLAY (AM). According to Phillips, this radio station’s “open format” (of broadcasting music from both white and black musicians) would later inspire his work in Memphis.

On January 3, 1950, Phillips opened the “Memphis Recording Service” at 706 Union Avenue in Memphis, Tennessee, which also served as the studios for Phillips’ own label, Sun Records, through the 1950s. In addition to musical performances, he recorded events such as weddings and funerals, selling the recordings.

Phillips recorded what some—notably music historian Peter Guralnick—consider the first rock and roll record: “Rocket 88” by Jackie Brenston and his Delta Cats, a band led by 19-year-old Ike Turner, who also wrote the song. The recording was released on the Chess/Checker record label in Chicago, in 1951. From 1950 to 1954 Phillips recorded the music of black rhythm and blues artists such as James Cotton, Rufus Thomas, Rosco Gordon, Little Milton, Bobby Blue Bland, and others. Blues legends such as B.B. King and Howlin’ Wolf made their first recordings at his studio. In fact, Phillips deemed Howlin’ Wolf his greatest discovery and he deemed Elvis Presley his second greatest discovery.

Although much has been written about Phillips’ goals, he can be seen stating the following: “Everyone knew that I was just a struggling cat down here trying to develop new and different artists, and get some freedom in music, and tap some resources and people that weren’t being tapped.” (The Rockabilly Legends; They Called It Rockabilly Long Before they Called It Rock and Roll by Jerry Naylor and Steve Halliday DVD, 22:00 ISBN-13;: 978-I-4234-2042-2)

Elvis Presley, who recorded his version of Arthur “Big Boy” Cruddup’s “That’s All Right (Mama)” at Phillips’ studio, met that goal, and became highly successful, first in Memphis, then throughout the southern United States. For the first six months, the flip side, “Blue Moon of Kentucky”, his upbeat version of a Bill Monroe bluegrass song, was slightly more popular than “That’s All Right (Mama).” While still not known outside the South, Presley’s singles and regional success became a drawing card for Sun Records, as singing hopefuls soon arrived from all over the region. Singers such as Sonny Burgess (“My Bucket’s Got A Hole In It”), Charlie Rich, Junior Parker, and Billy Lee Riley recorded for Sun with some success, while others such as Jerry Lee Lewis, BB King, Johnny Cash, Roy Orbison, and Carl Perkins would become superstars.

Despite this popular regional acclaim, by mid 1955 Sam Phillips’ studio experienced financial difficulties, and he sold Presley’s contract in November of that year; RCA Records‘ offer of $35,000 beat out Atlantic Records‘ offer of $25,000. Through the sale of Presley’s contract, he was able to boost the distribution of Perkins’ song “Blue Suede Shoes“, and it became Sun Records’ first national hit.

Phillips is credited with teaching production to Presley who used this knowledge into his career with RCA Victor. Although Steve Sholes was credited as the official producer of Elvis after his move to RCA, it was Elvis who in reality, produced most of the music, using what he had learned from Sam Phillips.

Phillips had an open style and insightful guidance that seemed to allow musicians, especially Presley, to search and feel their way to a point to where they would perform beyond Phillips’ and their own expectations. He also seemed to have a sense for when the artist was about to reach the point of their best performance. Phillips recorded looking for a feel, not technical perfection. Phillips told Elvis that the worst thing he could go for was perfection. Phillips was always seeking what he called the perfect/imperfect cut. This meant that it was not technically perfect, but perfectly conveyed the feeling and emotion of the song to the listener and gave the song a living personality, partially due to it being technically imperfect.

Phillips innovated while recording Elvis. Most recordings at the time gave substantially more volume to the vocals. Phillips pulled back the Elvis vocals, blending it more with the instrumental performances. Phillips also used tape delay to get an echo into the Elvis recordings by running the tape through a second recorder head. RCA, not knowing the method that Phillips had used, was unable to recreate the Elvis echo when recording “Heartbreak Hotel“. In an attempt to duplicate the Sun Records sound, RCA used a large empty hallway at the studio to create an echo, but it sounded nothing like the echo that Phillips had created at Sun Records.

Elvis did not have a band when he arrived at Sun Records. It was Sam Phillips who decided that little was needed to augment Elvis’ vocals and rhythm guitar. Phillips chose two musicians, lead guitarist Scotty Moore and bassist Bill Black to perform with Elvis. This choice of musicians proved to be inspired as this group along with drummer D.J. Fontana produced some of the biggest hits in rock ‘n’ roll history, even after Phillips had sold the Presley contract to RCA Victor. These included “Heartbreak Hotel“, “Hound Dog“, and “Don’t Be Cruel“.

Phillips’ pivotal role in the early days of rock and roll was exemplified by a celebrated jam session on December 4, 1956 which came to be known as the Million Dollar Quartet. Jerry Lee Lewis was playing piano for a Carl Perkins recording session at Phillips’ studio. When Elvis Presley walked in unexpectedly, Johnny Cash was called into the studio by Phillips, leading to an impromptu session featuring the four musicians.

Phillips challenged the four to achieve gold record sales, offering a free Cadillac to the first. The contest is commemorated in a song by the “Drive-by Truckers“.

Phillips launched radio station WHER on October 29, 1955. Each of the young women who auditioned for the station assumed there would only be one female announcer position like other stations at that time. Only a few days before the first broadcast did they learn of the “All Girl Radio” format. Almost every position at the station was held by a woman.[1]

Through savvy investments, Phillips soon amassed a fortune. He was one of the first investors in Holiday Inn, a new motel chain that was about to go national; he became involved with the chain shortly after selling the rights to Elvis Presley to RCA for $35,000 which he multiplied many times over the years with Holiday Inn. He would also create two different subsidiary recording labels–Phillips International and Holiday Inn Records. Neither would match the success or influence of Sun, which Phillips ultimately sold to Shelby Singleton in the 1960s.

Rock and Roll Hall of Fame

Phillips died of respiratory failure at St. Francis Hospital in Memphis, Tennessee on July 30, 2003, only one day before the original Sun Studio was designated a National Historic Landmark. He is interred in the Memorial Park Cemetery, Memphis.

He is portrayed by Charles Cyphers in the 1979 film Elvis, Trey Wilson in the 1989 film Great Balls of Fire! and by Dallas Roberts in the 2005 film Walk the Line. He was portrayed by Gregory Itzin in a 1993 episode of Quantum Leap entitled “Memphis Melody.”

He was also portrayed in the 1981 movie This Is Elvis by son Knox Phillips.