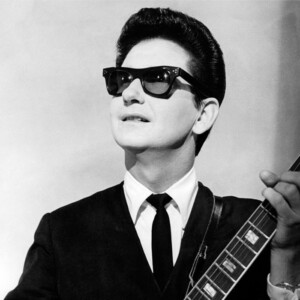 Roy Kelton Orbison was born on April 23, 1936 at 3:30 pm, in Vernon, Texas. Nadine, his mother, was a nurse. Orbie Lee, his father, a worker. Roy was their second child. For his sixth birthday, Roy asked for a harmonica, but fortunately his daddy gave him a guitar. Orbie Lee is generally credited with teaching Roy to play guitar. However, he also learned from Charlie Orbison, Orbie Lee’s brother, and Kenneth Schultz, brother of Nadine’s. Together with Clois Russell, Orbie Lee’s neighbor and workmate, they would often play and sing. The first song Roy ever played was the classic “You Are My Sunshine”. He learned very quickly, so that way he could stay up late with the grown-ups and sing.

The Orbison family moved to Forth Worth sometime in 1942. In Forth Worth, they found employment in the munitions and aircraft factories that had been expanded due to America’s entry into World War II. But due to epidemic polio in 1944, Roy and his elder brother Grady were sent back to live with their maternal grandmother, a divorcee, in Vernon. Roy wrote his first song “A Vow of Love”, in front of his grandmother’s house the same year. In 1945 he entered and won a contest on KVWC in Vernon and this led to his own radio show singing the same songs every Saturday. In 1946 a medicine show came to town and Roy entered the talent contest singing “Mountain Dew” and “Jole Blon”, and tied for first place with a 15-year-old kid. The total prize was $15, so he got $7.50 and gave his buddy half of that for carrying his guitar.

When the War was over, the family re-united in Vernon and soon moved out west to Wink, Texas, in late 1946. He formed his first band when he was thirteen, in 1949. They called themselves The Wink Westerners.

In 1951 Roy had been appearing regularly on KERB radio in Kermit. By 1953 the band, got their own show on KERB sponsored by local businessmen one day a week before school. The Wink Westerner’s first appearance was at one of the school assemblies. They were also featured on the KERB Jamboree on Saturday afternoons with local Country & Western bands. The first songs they played were “Kaw-liga”, “Mexican Joe”, “Caribbean”, and “Under the Double Eagle”. But they were not only country, little by little they began playing and making string arrangements for Big-Band standards and instrumentals like “In The Mood” or “Little Brown Jug” as well as Pop standards. During the summer, Roy would work for the County shoving tar, or work in the oil fields chopping steel or painting water towers. Roy used to be part of the marching band and singing octet, and at some point or another tried to play the baritone horn. He even had become the manager of Wink High school’s Kittens football team in 1952.

At one of the band’s gigs in McCamey’s Lions Club, somebody offered them to play a dance and pay them for it. The pay for that gig was as good as a hard working week’s pay, so they agreed to do it even though they only knew 4 or 5 songs. They learned some more tunes in a rush practicing at the Community Center, and started getting paid for what they liked doing.

They were invited to tour West Texas with R. A. Lipscomb who was running for the office of district governor of the Lions Club in 1953. They attended the 36th International Lions Club Convention in Chicago from July 3rd to July 11th of that year… Together with Mr. Lipscomb, they all stayed at the Conrad Hilton Hotel and the Wink Westerners performed in the front lobby. Roy graduated from Wink High in June 1954 and signed up to attend the fall seminar at the North Texas State College in Denton, returned home for Christmas and played the New Year Dance on December 31st 1954 with the Wink Westerners.

Wade Lee Moore and Dick Penner where two college friends of Roy’s at Denton and they had written “The Ooby Dooby”. Dick Penner arranged for them to record his song at Jim Beck’s studio in the outskirts of Dallas, Texas, which is South-East of Denton. Beck had been instrumental in the discovery of Lefty Frizzell and Marty Robbins for Columbia Records, so the band headed for Dallas to record “Ooby Dooby” and “Hey, Miss Fannie” which appears to be a duet of Roy and James Morrow. The session took place at some point during the summer of 1955 before the boys returned to West Texas. Roy was convinced that they would be signed to Columbia Records, which never happened.

During the summer of ’55 the Wink Westerners regrouped back in West Texas. When not appearing at local clubs, they would play at the Saturday Night Jamboree in Jal, New Mexico. The band somehow managed to appear, along with other local Country and Western bands, on a Saturday afternoon television show on KMID-TV Channel 2, out of Midland. In addition to their regular repertoire, they began to play some Rock and Roll numbers including “That’s All Right Mama”, “Rock Around The Clock” and of course, “Ooby Dooby” . They were an instant success and as a result were given their own thirty-minute show on Friday nights on KMID.{mospagebreak}

Roy enrolled at Odessa Junior College in the fall of 1955 wanting to major in Geology but then changed to History and English. Soon, the band moved in together to a duplex in Walnut Street in Odessa. With a couple of new members they renamed themselves “The Teen Kings” as they were playing more and more Rock and Roll. They got a second weekly local TV show on Saturdays from 4:30 to 5 PM on KOSA-TV, Odessa, Channel 7, which was part of the national CBS network. Johnny Cash and also Elvis Presley came in town to perform around this time and appeared on Roy’s TV show. Roy asked Johnny for advice on how to get a record released and Cash gave him Sam Phillips telephone number in Memphis. He called Mr. Phillips who hung up the phone saying, “Johnny Cash doesn’t run my record company”.

Roy had been approached by local entrepreneur Weldon Rogers, who had an associate by the name of Chester C. C. Oliver. They were just starting up the Je-Wel label and wanted to record Roy and the band. Roy was anxious to take Rogers and Oliver up on their offer and Je-Wel’s first recording session was hastily arranged for March 4, 1956 at Norman Petty Studio in Clovis, New Mexico. This time, Roy and The Teen Kings, recorded The Clover’s “Trying to Get to You” and “Ooby Dooby”. The single was released two weeks later circa March 19, 1956. That same day, Roy took a copy to Cecil Hollifield in Odessa. He was a well-know record dealer in West Texas. “Poppa” Hollifield liked the record and played it on the phone to one of his connections in Memphis. The guy on the other side of the line asked him to send him a copy. His name was Sam Phillips, owner of Sun Records. A few days later “Poppa” telephoned Roy to say that Phillips wanted the Teen Kings in Memphis in three days to record for Sun Records.

Roy and the Teen Kings arrived in Memphis on Monday, March 26, 1956. The next day they re-recorded “Ooby Dooby”, “Trying to Get to You” and “Go Go Go (Down the Line)”. Bob Neal, owner of Starts Inc., signed the group to a booking and management contract. They kicked off with an experimental tour of Southern drive-in movies theaters, performing on the projection house roofs between film showings. Most of the time touring with Carl Perkins, Johnny Cash, Warren Smith, Sonny Burgess, Faron Young, Johnny Horton and then Jerry Lee Lewis and other Country and Rockabilly stars.

“Ooby Dooby” peaked at number #59 on the national charts in June 1956 but the next Sun singles did not chart and Roy started developing his songwriting talent. The Teen Kings split up in December 1956 and Roy used studio musicians for the upcoming Sun sessions. He stayed at Sun until 1958.

Bob Neal offered Roy a spot on an Everly Brothers show in Hammond, Indiana in March 1958. The Everlys needed a song for their new single and they asked Roy if he had anything. He sang his new composition “Claudette” and they asked him to write the words down. So he did, on the top of a shoebox. Later, Wesley Rose, from Acuff-Rose Music Publishing in Nashville, signed Roy with his Nashville publishing company. He also gave Roy a contract with RCA Victor where he briefly worked with Chet Atkins.

The Everly’s “Claudette” was released on late March 1958 as the B-side of “All I Have To Do Is Dream”. The A side went to number 1; “Claudette” peaked at Number 30. At this point, his songs were also recorded by Buddy Holly, Jerry Lee Lewis and Rick Nelson.

Wesley Rose rapidly got Roy another contract with the new independent Monument Records when his RCA deal ran out in Mid-1959.