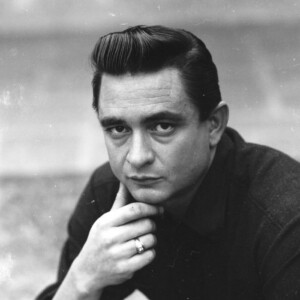 Johnny Cash, born J. R. Cash, (February 26, 1932 – September 12, 2003) was a Grammy Award-winning American country singer-songwriter. Cash is widely considered to be one of the most influential American musicians of the 20th century.

Cash was known for his deep, distinctive voice, the boom-chick-a-boom or “freight train” sound of his Tennessee Three backing band, his demeanor, and his dark clothing, which earned him the nickname “The Man in Black”. He traditionally started his concerts with the introduction “Hello, I’m Johnny Cash.”

Much of Cash’s music, especially that of his later career, echoed themes of sorrow, moral tribulation, and redemption. His signature songs include “I Walk the Line”, “Folsom Prison Blues”, “Ring of Fire”, “That Old Wheel” (a duet with Hank Williams Jr.), “Cocaine Blues”, and “Man in Black”. He also recorded several humorous songs, such as “One Piece at a Time”, “The One on the Right Is on the Left”, “Dirty Old Egg-Sucking Dog” and “A Boy Named Sue”; rock-and-roll numbers such as “Get Rhythm”; and various railroad songs, such as “Rock Island Line” and “Orange Blossom Special”.

He sold over 90 million albums in his nearly fifty-year career and came to occupy a “commanding position in music history”.

In 1954, the Cash moved to Memphis, Tennessee, where he sold appliances, while studying to be a radio announcer. At night, he played with guitarist Luther Perkins and bassist Marshall Grant. Perkins and Grant were known as the Tennessee Two. Cash worked up the courage to visit the Sun Records studio, hoping to get a recording contract. After auditioning for Sam Phillips, singing mostly gospel songs, Phillips told him to “go home and sin, then come back with a song I can sell.” Cash eventually won over Phillips with new songs delivered in his early frenetic style. His first recordings at Sun, “Hey Porter” and “Cry Cry Cry,” were released in 1955 and met with reasonable success on the country hit parade.

Cash’s next record, Folsom Prison Blues, made the country Top 5, and “I Walk the Line” became No. 1 on the country charts, also making it into the pop charts Top 20. Following “I Walk the Line” was Johnny Cash’s “Home of the Blues,” recorded in July 1957. In 1957, Cash became the first Sun artist to release a long-playing album. Although he was Sun’s most consistently best-selling and prolific artist at that time, Cash felt constrained by his contract with the small label. Elvis Presley had already left Sun, and Phillips was focusing most of his attention and promotion on Jerry Lee Lewis. The following year, Cash left the label to sign a lucrative offer with Columbia Records, where his single “Don’t Take Your Guns to Town” would become one of his biggest hits.