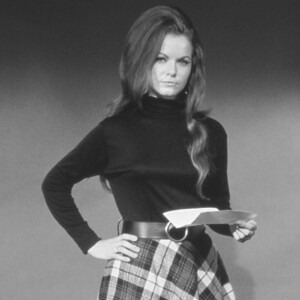 Born Jeanne Carolyn Stephenson on October 19, 1945 in Stamford, Texas and raised in the small west-Texas town of Anson, Texas. The second daughter to Oscar and Nora Stephenson. Her father worked as an automobile mechanic and her mother was employed at the local hospital as a nurse.

Her early memory of Anson, Texas, was living in a house that had no foundation under it. A little frame box that sat on concrete-block pillars. The hot, west-Texas wind blew under it in the summer, and the blue northers whined and moaned around it in the winter when they nearly froze to death.

Jeannie remembers vowing that some day, somehow, some way, she was going to taste the excitement promised by the world outside of Anson. She was going to be somebody. Somebody big. One day she uttered her first real prayer that she would make it big as a singer in Nashville; then she would send for her parents and have them live with her in her mansion. Other girls in Anson helped with knitting, sewing and cooking, but Jeannie spent all her spare time memorizing country music. She took shorthand in high school for just that one purpose: copying the words of the songs as she heard them on the radio. Then she would write them over in longhand and sing them over and over.

By the time she was a sophomore in high school, the war inside her was raging fierce. Maybe it was the reflection of the mood of the nation in the early ’60’s. The Korean War was over, there was a crisis in Berlin and talk of more trouble in a place called Vietnam. When Jeannie’s boyfriend, Mickey Riley, had graduated from high school and had been called to active duty in the navy, Jeannie was ready to leave home. But how does a 16-year-old girl just pick up and leave a little town of 2,000?

Jeannie’s Uncle Johnny Moore, played the guitar in a country music band. Ever since he had gone to Nashville with some musicians to do recordings, everybody in Anson considered him something of a star. Her Uncle Johnny arranged for her to sing at the Jones County Jamboree held once a month at an old schoolhouse in Truby, Texas – about a 20-minute ride from Anson. Her mother was working the 3-to-11 shift at the hospital, but her dad was there to hear her sing.

She was nervous. Her heart was pounding. When they called her to the microphone, though, she belted out two songs in perfect meter and didn’t forget a single word. She knew there would be a next time. And that the next time would be easier. She was on her way. That night her daddy bragged to Jeannie’s mama. “Jeannie sang tonight. I was proud of the little booger. She done real good.”

Mickey returned from the navy as Jeannie began her senior year in high school in the fall of 1962. Right away he started talking about marriage. They wed on December 20 at the First Baptist Church in Anson, Texas.

They moved into a small apartment and struggled each month to make it on his salary. They postponed going to Nashville until Jeannie was to graduate from High School and they had saved some money. Jeannie went to the doctor for a check-up and the doctor told her she was pregnant. Kim Michelle Riley was born January 11, 1966. Mickey and Jeannie were happier that year then they had ever been.

One day in the mail a letter arrived from Weldon Myrick. Weldon had played the steel guitar at the Jones County Jamboree in Truby, Texas and had heard Jeannie sing. Now he had gone on to work for Bill Anderson in Nashville. Bill had discovered a little housewife in Ohio whose first record went straight to the top. Her name was Connie Smith. Weldon went on to say I think you could do just as well someday, well that’s all Jeannie needed
to hear.

She would listen to the Grand Ole Opry on Saturday night radio while washing dishes and cry. Her tears falling into the dishwater while listening to Merle Haggard singing “Swinging Doors”. She would give Kim her bottle, and the music from the radio would switch her a thousand miles away. The fragrance of stardom scented every evening breeze, beckoning her to faraway Nashville.

Jeannie’s Uncle Johnny suggested they accompany him on one of his trips to Music City, it was the chance of a lifetime.

As they pulled into Nashville and rounded a corner and right in front of them was the throne room of music heaven – Ryman Auditorium, the home of the Grand Ole Opry. Jeannie just sat there in the car and cried.

Uncle Johnny had gotten them into the Opry that very night. He had been there a number of times and knew the guards at the door. Jeannie could hardly believe she was now standing backstage at the Opry and watching the stars and they entered. Uncle Johnny reached out and grabbed a man named Doyle Wilburn by the arm. The Wilburn Brothers, Doyle and Teddy had made it big at the Opry and had their own TV Show and publishing business. It was common talk they were the ones who had make a star out of Loretta Lynn since she was the regular vocalist on their TV show. Uncle Johnny said to Doyle, “I don’t mean to bug you, but I got my little niece here, if you would just listen to her sing one time, I know you would be interested.
I think she’s got it.”

They set up an audition that following wednesday. They decided they wanted Jeannie to go into the studio and record a few demos. She recorded two songs the first night and came back to do two more the next night. The following day she was at the taping of the Wilburn Brothers TV Show. A photographer from WSM came to the set to make pictures of Jeannie, she could hardly believe all that was happening.

They returned to Anson. Doyle Wilburn had talked to Jeannie’s Uncle Johnny and said they had a tour of Germany coming up in September. They needed a girl vocalist to go along and would be contacting Jeannie. July passed. Then August, Jeannie could not think of anything but Nashville. But the Wilburns never contacted her. She was confused.

One afternoon Mickey came in from work and said, “Start packing your bags, I’ve quit my job. I’m tired of seeing you mope around. We’re moving to Nashville. If we’re ever going to try it, it might as well be now while we’re still young.”

In the heat of August ‘66 our little family pulled up steaks
Leaving dear ole Texas far behind.
In a ‘57 Chevy we headed east for Music City
With a song in our hearts and lot of stars in our eyes.
We didn’t have to go to hungry, cause we always
did like bologna
Can’t eat steak on filling station pay
While Mickey kept the gas a pumping, I sat home a hopin’
Then came that long awaited day, we landed our big break.
It’s the number one song in the nation
It’s gonna sell a million wait and see.
It’s the number one song in the nation
And I’m so excited I can’t even sleep.