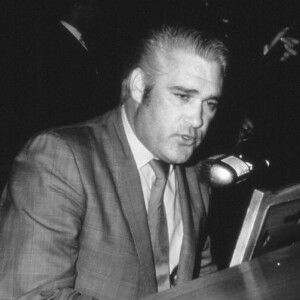 No singer’s career illustrates the vicissitudes of country-music stardom better than that of Charlie Rich, the “Silver Fox.” Rich achieved superstardom as a “crossover” artist in 1973 with two hit singles, “Behind Closed Doors” and “The Most Beautiful Girl,” but for two decades before that he had struggled to find the right sound and style. The years since 1973 have been almost as daunting, because Rich, a blues and rock aficionado, has never been comfortable with the label “country star.” All categories aside, Rich appeals to a broad audience with his soul-wrenching vocals. “I don’t really like happy music,” he told Newsweek. “I don’t think it says anything.”

Like many of his contemporaries in country music, Rich grew up in poverty on a cotton farm, miles from the glittering promise of Nashville. He was born and raised in Colt, Arkansas, population 312. Before he finished high school he was earning wages as a cotton picker for his father and other local farmers. Music was a sideline–one that was strictly monitored by his Baptist missionary parents. Rich was allowed to play the tenor saxophone in the high school band, but playing at dances and playing for money were forbidden.

Rich was a serious music student who developed a taste for jazz, especially the works of Stan Kenton and Oscar Peterson. For some time he attended the University of Arkansas, where, as a music major, he perfected his blues and jazz techniques on horn and piano. In 1952 he enlisted in the Air Force and was stationed in Enid, Oklahoma. There he joined a jazz group and began moonlighting in the local honky-tonks and clubs. During this period he met and married his wife, Margaret Ann, also a jazz buff and singer. Upon his discharge he returned to his father’s cotton farm, but Margaret Ann had other ideas. She took a demo tape to the Sun Records studios, where producer Sam Phillips was working with the likes of Jerry Lee Lewis, Johnny Cash, Elvis Presley, and Roy Orbison. Phillips’s associate Bill Justis listened to the tape and hired Rich as a session musician.

Justis and Phillips were candid with Rich: his sound was too jazzy and too elegant for success as a solo performer. He would have to loosen up and start composing and singing in the Jerry Lee Lewis vein. Rich obliged, even to the extent of writing a hit for Lewis, “I’ll Make It All Up to You.” Although Phillips predicted at one point that Rich’s future in music looked as promising as Presley’s, Rich had only one charted single on the Sun label, “Lonely Weekends.” Rich wrote and sang the tune, which has since been recorded by a wide variety of country and rock artists. The singer told Newsweek that he had become quite disenchanted with Sun Records by the early 1960s. “Sam Phillips had gotten wealthy,” he said, “and was more interested in Holiday Inn stock than the record business.” Rich switched to Groove, a subsidiary of RCA, in 1963 and earned his second charted hit, “Big Boss Man.”

The 1960s found Rich groping for a marketable style as he returned to the honky-tonk circuit. He had a brief period of success with Smash Records, where he recorded the rhythm-and-blues hit “Mohair Sam,” but again subsequent albums failed to sell. In 1968 he signed with Epic Records and worked with up-and-coming producer Billy Sherrill.

Gradually Rich began to integrate his blues, rock, and country influences into a cohesive sound. Sherrill directed him more toward country music, feeling that country fans would respond to his mature years better than the youth-oriented rock audience. The 1972 Best of Charlie Rich and the 1973 Behind Closed Doorsbrought Rich the elusive stardom he had sought so long–and, ironically, Behind Closed Doors sold to pop fans as well as to the country market. Overnight the silver-haired Rich became a sought-after headliner, with million-selling singles such as “Behind Closed Doors” and “The Most Beautiful Girl.”

Sherrill was right in one respect: country fans are more loyal than pop-rock fans. Rich has been the recipient of that loyalty for almost twenty years, remaining a favorite in Nashville despite his penchant for jazz and the blues. Drawing from eclectic sources as it does, Rich’s work has been dubbed “countrypolitan,” and the singer has been likened to Frank Sinatra for his middle-of-the-road sexiness. Country Music Encyclopedia author Melvin Shestack quotes Peter Guralnik on the enduring appeal of the “Silver Fox”: “The music that [Rich] does, his approach to the music, his ability to make each song a unique and personal vehicle for individual expression is something which in a way is lost to the star who is as much concerned with panoply as performance, who is forced by his image to be something he is not…. Charlie Rich is free to be whatever he likes. He feels none of the terrible restraints of stardom.” Even so, he has remained famously independent (he once walked out on an imminent appearance on the Ed Sullivan television show), and he has kept himself at arm’s length from musical Nashville’s sociopolitical vortex. He currently lives near Redding, in northern California, well away from music industry power centers.