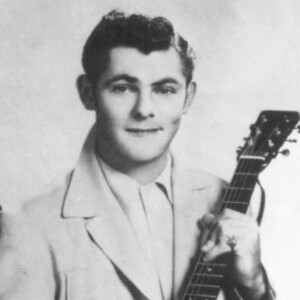 Charles Arthur Feathers was born in Holly Springs, Mississippi, and recorded a string of popular singles like “Peepin’ Eyes,” “Defrost Your Heart,” “Tongue-Tied Jill,” and “Bottle to the Baby” on Sun Records, Meteor and King Records in the 1950s.

Feathers was known for being a master of shifting emotional and sonic dynamics in his songs. His theatrical, hiccup-styled, energetic, rockabilly vocal style inspired a later generation of rock vocalists, including Lux Interior of The Cramps.

His early influences were from African American field blues he heard in Mississippi as a youth. He studied and recorded several songs withJunior Kimbrough, whom he called “the beginning and end of all music.” His childhood influences were reflected in his later music of the 1970s and 1980s, which had an easy-paced, sometimes sinister, country-blues tempo, as opposed to the frenetic fast-paced style favored by some of his rockabilly colleagues of the 1950s.

He started out as a session musician at Sun Studios, playing any side instrument he could in the hopes of someday making his own music there. He eventually played on a small label started by Sam Phillips called Flip records which got him enough attention to record a couple singles for Sun Records. By all accounts the singer was not held in much regard by Phillips, but Feathers often made the audacious claim that he had arranged “That’s All Right” and “Blue Moon Of Kentucky” for Elvis Presley and recorded “Good Rockin’ Tonight” months before Presley. He also claimed that his “We’re Getting Closer (To Being Apart)” had been intended to be Elvis’ sixth single for Sun. He did, however, compose one of Elvis’ Sun recordings, “I Forgot To Remember To Forget“.

He then moved on to Meteor Records and then King Records where he recorded his best-known work. When his King contract ran out he still continued to perform, although Feathers – perhaps typically – thought there was a conspiracy to keep his music from gaining the popularity it deserved.

In the mid-1980s, he performed at times at new music nightclubs like the Antenna Club in Memphis, Tennessee, sharing the bill with rock-and-roll bands like Tav Falco’s Panther Burns, who, as devoted fans of Feathers, had introduced him to their label’s president.

He released his New Jungle Fever album in 1987 and Honkey Tonk Man in 1988, featuring the lead guitar work of his son, Bubba Feathers. These later albums of original songs penned by Feathers were released on the French label New Rose Records, whose other 1980s releases included albums by cult music heroes like Johnny Thunders, Alex Chilton, Roky Erickson, The Cramps, The Gun Club, and others.

Colonel Robert Morris was one of Charlie’s drummers in the 1970s.

He died on August 29, 1998 of complications from a stroke-induced coma.

Feathers was known in his later years for making audacious and unverifiable claims regarding his influence on the evolution of rockabilly. In spite of this, the remarkable quality of his recordings suggests that his assertions should be taken with at least some seriousness.

Charlie Feathers’ pioneering contribution to the genre has been recognized by the Rockabilly Hall of Fame. Bob Dylan has featured Charlie Feathers on the second season of his XM Satellite Radio Show Theme Time Radio Hour, playing Feathers’ records “One Hand Loose” (on the “Countdown” show, Dec. 12, 2007) and “Defrost Your Heart” (on the “Cold” show, April 2, 2008).