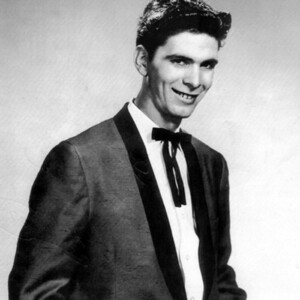 Carl Mann (b. Aug. 22, 1942, Huntingdon, Tennessee) is an American rockabilly singer and pianist.

Mann was raised in rural Tennessee; his parents owned a lumber business. He sang in church and did country songs for local talent shows, playing guitar and piano. In 1957, he released his first single on Jaxon Records, “Gonna Rock and Roll Tonight” b/w “Rockin’ Love”. Several further singles on Jaxon followed, after which Carl Perkins‘ drummer, Bill Holland, became Mann’s manager, signing him to Sun Records.[1] Sun owner Sam Phillips signed Mann to a three-year contract, and soon after Sun released Mann’s rockabilly version of Nat King Cole‘s “Mona Lisa“. Mann and Conway Twitty both released single versions of the tune at the same time, and both charted; it was sixteen-year-old Mann’s first hit, peaking at #24 on the US Black Singles chart and #25 on the Billboard Hot 100 in 1959.[2]

Mann’s follow-up singles were less successful; he covered several pop standards, but the only charting hit was 1959’s “Pretend“, which peaked at #57 Pop.[2] An LP, Like Mann, was released in 1960 but did not sell well, and Mann began to drift from the business. He did a stint in the Army in 1964, and then released a single, “Down to My Last I Love You”, on Monument Records; after it failed, he returned to family life and battled problems with alcoholism.[1]

Mann returned as a country artist in 1974, releasing singles on ABC and Dot. His 1976 single “Twilight Time” scraped the US Country Singles chart, peaking at #100.[2] In 1977, he landed a deal with Dutch record label Rockhouse Records, who released a live/studio split Gonna Rock’n’Roll Tonight in 1978 and In Rockabilly Country in 1981. He toured occasionally in Europe in the 1980s, but eventually returned once again to running the family logging outfit.[1]